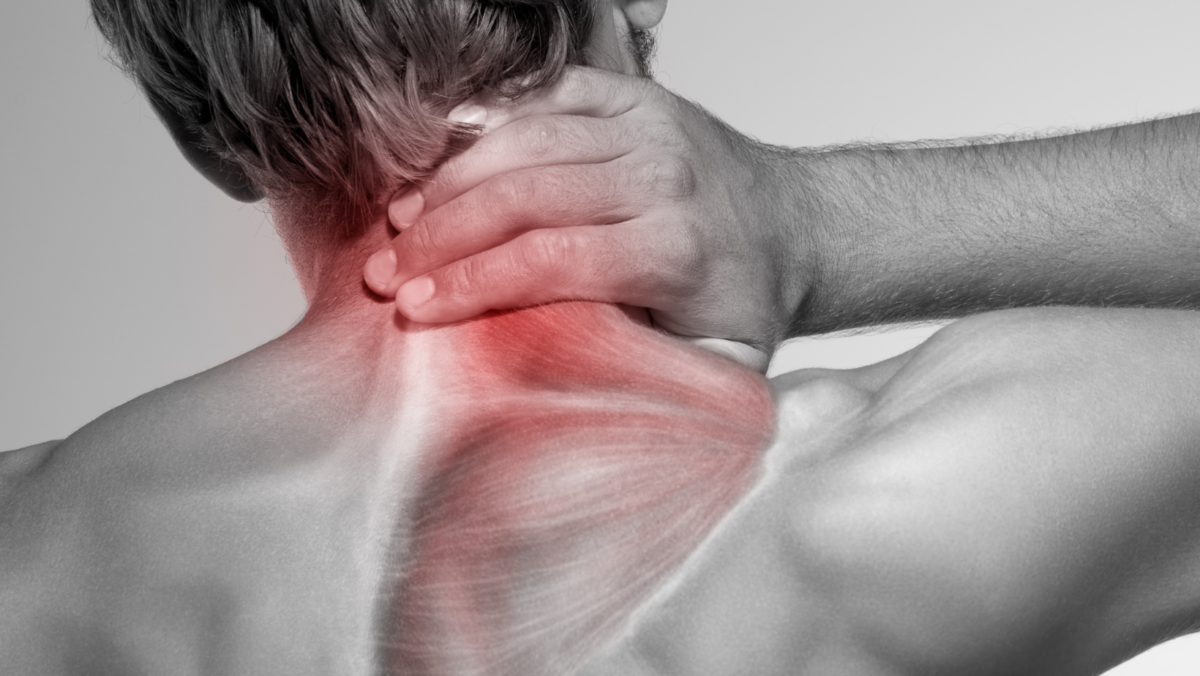 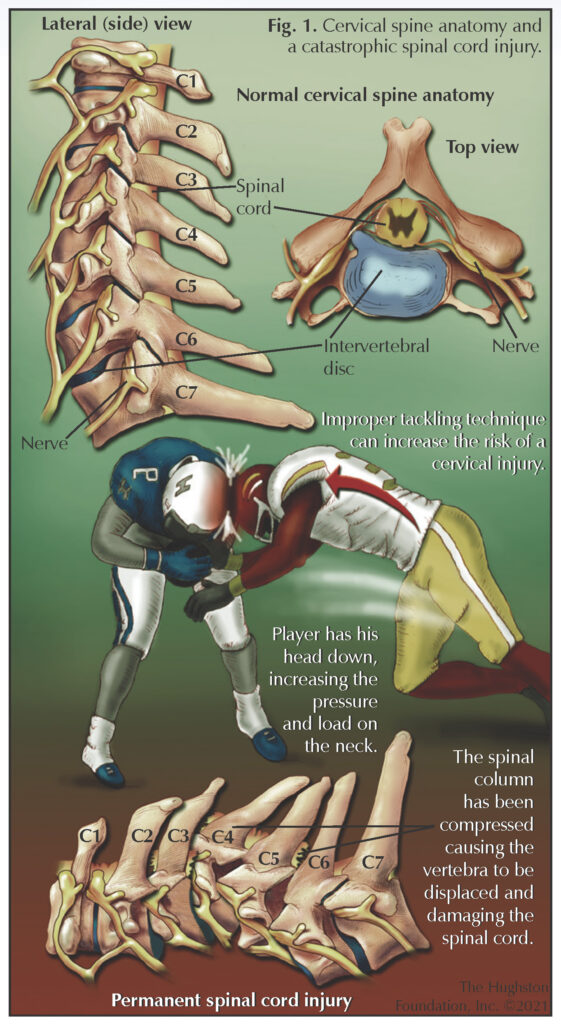 Cervical spine, or neck, injuries are one of the most traumatic injuries an athlete can experience. Although they are rare, when cervical injuries occur, they tend to grab major headlines, especially in athletes at the collegiate and professional levels. One reason the injury gets significant attention is that it has the potential to be irreversible and life-changing. An athlete’s career can be completely or nearly completely destroyed by such an injury. Even individuals who do not typically watch sporting events can remember instances in which famous athletes and celebrities have experienced catastrophic injuries. Actor Christopher Reeve, who was well known for his role as Superman, sustained a spinal cord injury because of 2 fractures in his neck while competing in an equestrian contest in 1995. He was thrown from his horse and landed directly on his head. He was immediately paralyzed from the neck down. Reeve ultimately became a spokesperson for spinal cord injury patients and research before his death.

As with Mr. Reeve’s injury, cervical spine injuries are often devastating to the athlete. It is rare for patients with a catastrophic cervical injury to return to their previous level of play. However, the inability to return to performing any activity, including something as simple as breathing, drives us to prevent these injuries. 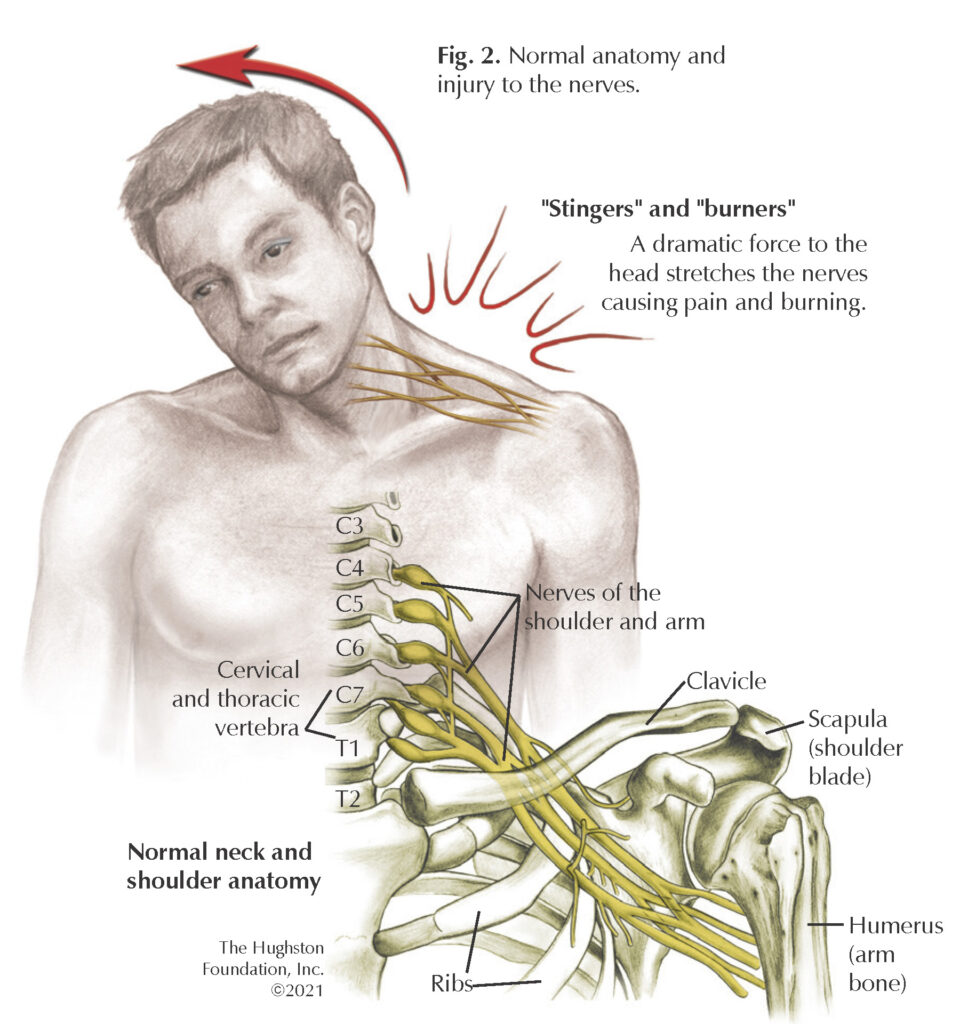 On review of the data from the National Center for Catastrophic Injury Research from the University of North Carolina, the highest rate of cervical spine injuries in high school sports occurs in ice hockey with 2.39 occurrences per 100,000 participants per year. Football and gymnastics were tied for second at 1.78, followed by wrestling, cheerleading, and lacrosse—all less than 1 occurrence per 100,000 participants per year.

When catastrophic injuries occur, the damage is typically caused from the injury itself; however, additional damage can occur while administering aid to an injured athlete or while the athlete is being moved from the field of play to a medical center. If the spine becomes unstable due to a fracture or broken bone, the spinal cord has lost its protective shell. When the injury occurs, the athlete is often unconscious and essentially at the mercy of the person tending to him or her. Numerous safety protocols have been established to help prevent a secondary injury. After an injury, the best method to prevent additional injury is to maintain control of the entire spine with the use of a hard cervical collar and long spine board. Rigid maintenance of spinal alignment is necessary, which is why injured athletes are often taped down to spine boards before moving them. Uncontrolled movement of an injured athlete with an unstable spine can cause a preventable spinal cord injury.

To reduce the risk of cervical spine injuries, athletes should use proper equipment, such as helmets and headgear. When possible, avoid head-first movements during collision sports, and use spotters during gymnastic events. Fortunately, cervical spine injuries are rare, but without proper gear and appropriate safety measures, the athlete is at a higher risk for a catastrophic injury.