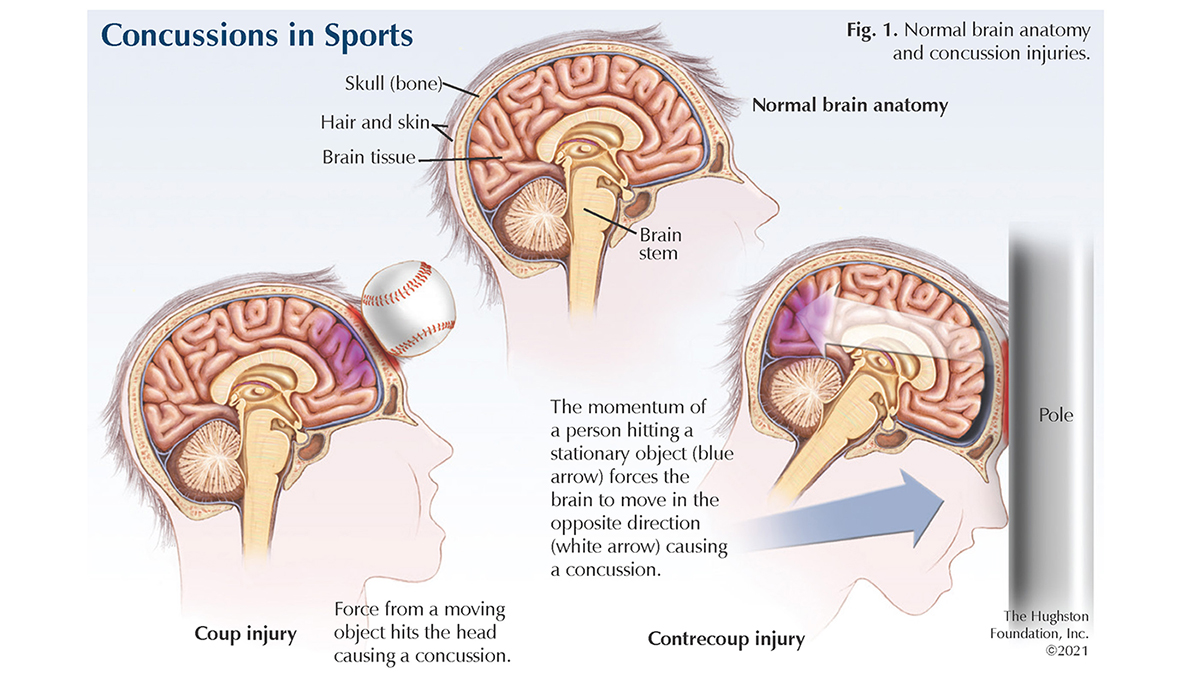 A concussion causes a temporary change in consciousness immediately after a blow to the head. When an athlete experiences a concussion his or her motor skills, coordination, balance, and cognitive abilities can be impaired. Concussions range in severity. In fact, a head injury can be so slight the athlete may not know that he or she has a concussion or it can be so severe the athlete is rendered unconscious. In addition to the severity, more than one concussion can cause serious effects. An athlete who has had more than one concussion has an increased risk of another concussion and the cumulative effect can be permanently damaging or deadly.

Concussions can be caused by a direct blow or by indirect trauma to the head. The way in which the trauma occurs can be categorized as coup, contrecoup, repeated subconcussive forces, and rotational or shear forces (Fig. 1). Coup injuries occur when an object moving at a high velocity strikes a stationary head. With a coup injury, the injured area is on the same side as the impact. A contrecoup injury occurs when a moving skull hits a stationary object such as a pole. With contrecoup injuries the injured area is on the opposite side of the impact. Athletes who receive numerous nontraumatic blows to the head often experience repeated subconcussive forces. The repeated trauma can result in disruption of electroencephalographic (EEG) activity in the brain. The final cause of a concussion is a sudden twisting force or acceleration and deceleration that can disrupt neurologic activity. Any of these types of trauma can result in unconsciousness, disorientation, or amnesia.

Signs and symptoms of concussions

An athlete can experience many different signs and symptoms after a head injury. When an athlete sustains a head injury there can be acute and late (delayed) symptoms. Acute symptoms occur immediately following the head injury while late symptoms can take hours or even days to appear in an athlete. Lightheadedness, disorientation, headache, balance problems, loss of consciousness, nausea, or tinnitus (ringing in the ears) are some examples of acute symptoms. Sleep irregularities, depression or anxiety, lethargy, memory dysfunction, personality changes, or irritability are some of the late signs and symptoms of concussion. 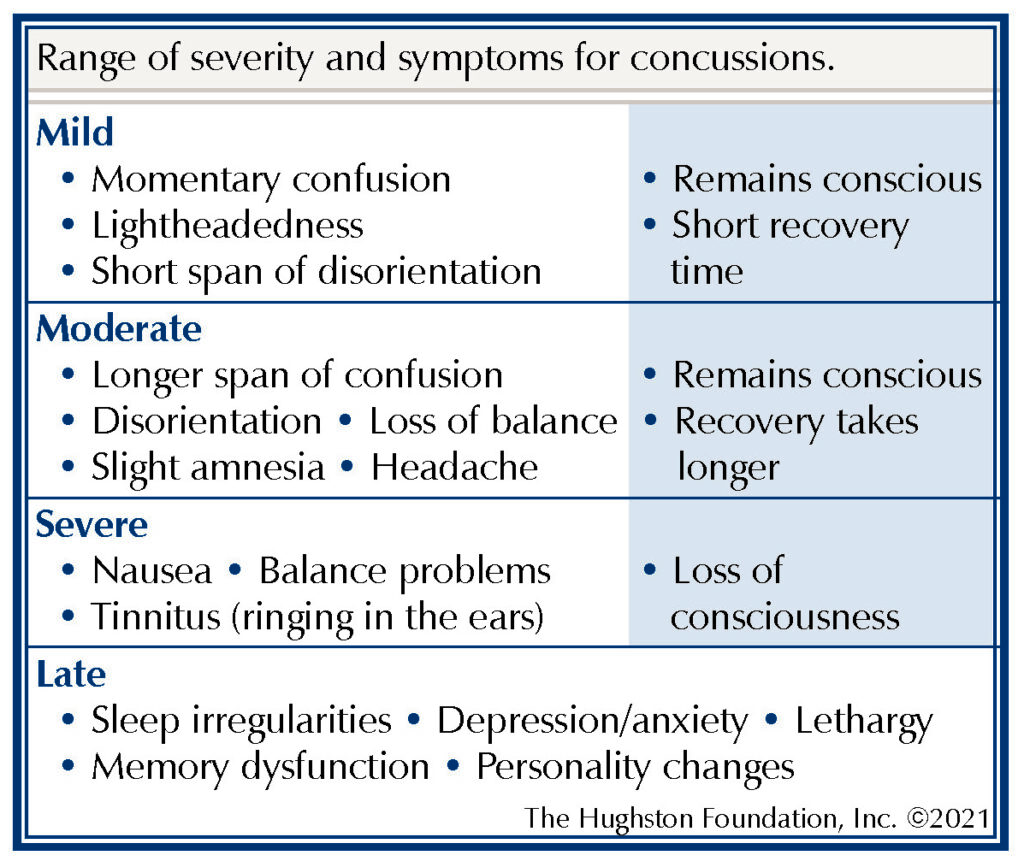 Concussions range in severity, but are best described as mild, moderate, or severe. A mild concussion disrupts function and can cause momentary confusion, but does not render the athlete unconscious. A moderate concussion causes longer lasting confusion and slight amnesia. A severe concussion results in loss of consciousness.

After determining the severity of the concussion, the athlete may or may not need to be referred to a physician or emergency medical facility. With any head injury precautions must be taken including rest from physical activity until the athlete shows no signs and symptoms or until a physician clears him or her for return to play. 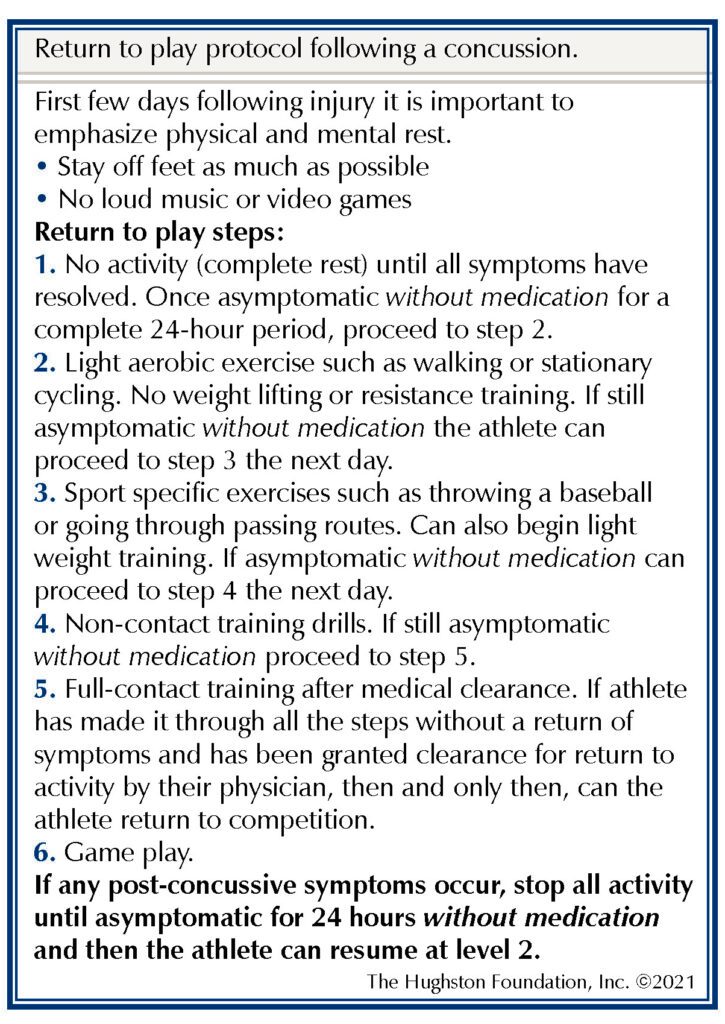 Athletes who have had a prior concussion are at an increased risk for having another one and it can take longer to recover from additional concussions. Second impact syndrome occurs when an athlete who has sustained an initial head injury, usually a concussion, sustains a second head injury before the symptoms associated with the prior injury have totally resolved. Second impact syndrome can be life threatening, which is why even minor head injuries should not be taken lightly.

The signs and symptoms from the first impact often involve visual, motor, or sensory changes. The athlete can also experience problems with thought and memory. When the athlete returns to play while still experiencing symptoms and sustains a second impact to the head, the intercranial pressure builds up due to vascular enlargement and the brain stem can become compressed. Within the skull, the brain can be under a lot of stress with swelling after an injury; but, on the outside the athlete can appear to be only a little shaken up. With second impact syndrome the emergency medical services should be contacted immediately and the athlete’s vital signs should be closely watched.

After a head injury, the athlete can recover within a few days. However, because there is a chance that a second impact can occur, it is imperative that an athlete becomes asymptomatic before being allowed to return to play. If an athlete has sustained several head injuries during his or her sport career, it can take longer for the symptoms to resolve and for him or her to return to play.

To help prevent a concussion, wear a good helmet and mouthpiece, strengthen the neck muscles, and follow the safety rules for the sport. For a safe and healthy recovery, follow an established return to play protocol.