Recreational ice skating and related sports, such as hockey, are popular winter activities. Regular participation in ice skating has shown to help individuals maintain balance as they age, but the activity is not without risk. About 1 in every 700 ice skaters will experience an injury,1 and the average age of those injured is 33 years old.2 Most incidents occur during falls on the ice, with inexperience and the slippery surface adding to the risks. Before you head to the rink, you should be aware of common injuries, how they occur, and understand what treatments are available. 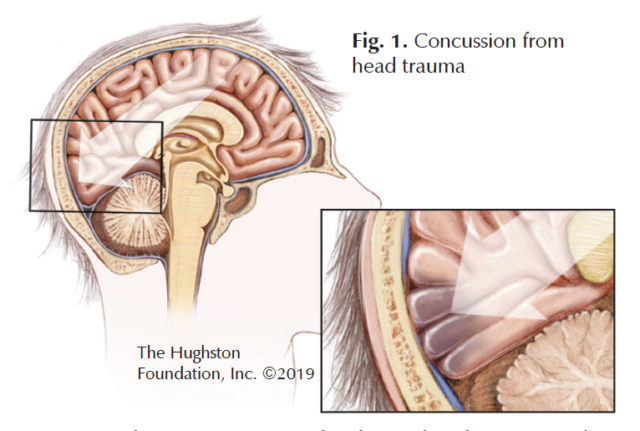 Head trauma only accounts for about 0.5% of ice skating injuries,1 but the rate increases significantly with participation in ice hockey. Concussion is a traumatic injury to the brain that can occur after a blow to the head, face, or neck (Fig. 1). When you experience a concussion, your motor skills, coordination, balance, and cognitive abilities may be impaired. Concussions range in severity; which means it can be so slight you may not know that you have a concussion or it can be so severe you are rendered unconscious. In addition to the severity, more than 1 concussion can cause serious effects. If you have sustained multiple concussions, you have an increased risk of another and the cumulative effect can be permanently damaging or deadly. After a blow to the head, you should seek immediate medical attention if there has been a loss of consciousness, continued confusion, worsening symptoms, weakness, numbness, slurred speech, vomiting, seizure, or blood or clear fluid coming from the nose or ears.

Symptoms from concussion can last from a few days to several months, and include: headache, dizziness, nausea, trouble paying attention, memory problems, irritability and depression. If you have sustained a concussion, you should stop sports participation immediately and avoid further at-risk activities until all symptoms have resolved. While recovering from a concussion, stimulation should be minimal, which means reducing screen time, avoiding loud music and noise, and limiting cognitive tasks. 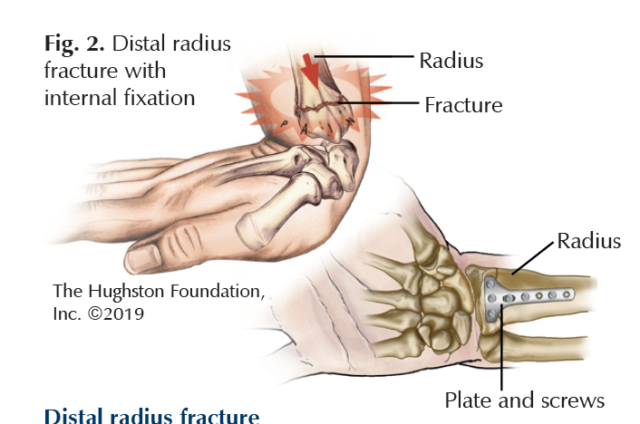 Almost all fractures sustained in ice skating occur in the upper extremity, with fractures of the distal radius (wrist) being the most common of these.1,2 Wrist fractures often occur during a fall on an outstretched hand, resulting in immediate pain and deformity at the injury site (Fig. 2). Once you present to an emergency department, doctors will often reduce (align the fracture) and place a splint to hold the bones in place. Further treatment will be determined with your orthopedist and depends on many factors such as: if the break includes the wrist joint, how many fracture lines you have, or if a splint can hold the bone fragments in the correct position. Closed reduction and percutaneous pinning or CRPP, (a procedure to align the bone using metal pins through the skin to hold the fracture while the bone heals), or open reduction with internal fixation (ORIF, a procedure to hold the fracture with metal plates and screws under the skin) are 2 treatment options that offer good results. Particularly in women, a distal radius fracture can be a sign of decreased bone mineral density;3 therefore, you should ask your doctor if further testing, such as a DEXA (dual energy x-ray absorptiometry, a type of bone scan) scan is needed. 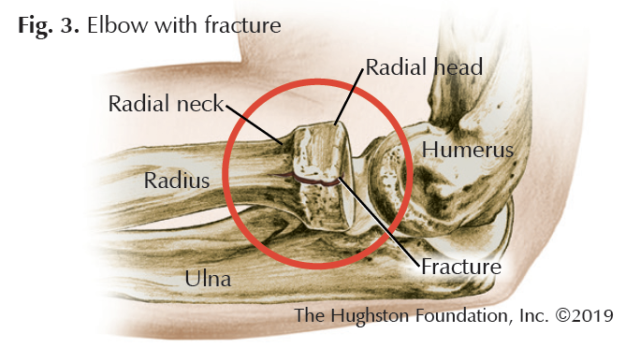 Another injury that can occur from a fall on an outstretched hand—radial head and neck fractures—occur about 10% less often than distal radius fractures.2 The radial head is the portion of the radius that helps form the elbow joint, with the radial neck located just below it. Unlike distal radius fractures, these injuries rarely result in a noticeable deformity, with patients mainly complaining of severe elbow pain, swelling, and reduced elbow motion.

The majority of these fractures can be treated without surgery, with an emphasis on regaining elbow motion early to avoid permanent stiffness. You may need surgery if the fracture involves multiple fragments or if the fragments have moved. Surgical treatments often involve holding the bone in position with metal plates and screws while the fracture heals, or replacement of the radial head with a metal prosthesis for more severe injuries.

Ice hockey is a much more physical and high-risk activity than recreational ice skating. Hockey resulted in the highest injury rate at the 2010 Olympics, with up to 35% of participants experiencing some amount of missed playing time.4 Since there is an increased risk of contact, common injuries in ice hockey involve the shoulder, hip, thigh, and knee rather than the elbow and wrist. Many of these injuries can be treated nonsurgically, with immobilization, rest, compression, and therapy. If the injury is severe or recurrent, surgery is sometimes needed.

Your best chance at avoiding an injury is to wear properly-fitted equipment, such as helmets, shoulder pads, hip pads and hockey pants, and skates. You should also properly maintain the equipment and replace it as it becomes worn or damaged. Furthermore, emphasis on playing “heads up” hockey with attention paid to surroundings and avoiding hard contact with another player can help reduce injury rates in this sport.

Ice skating is a popular activity that has numerous health benefits, but the sport is not without risks. Understanding common injuries and taking proper precautions to avoid them can help you enjoy these activities without incident. You can reduce the risk or avoid trauma all together by wearing snug-fitting skates with a straight back over the blade, and by using commercial wrist protectors. You can purchase affordable protective gear at most sporting goods stores.