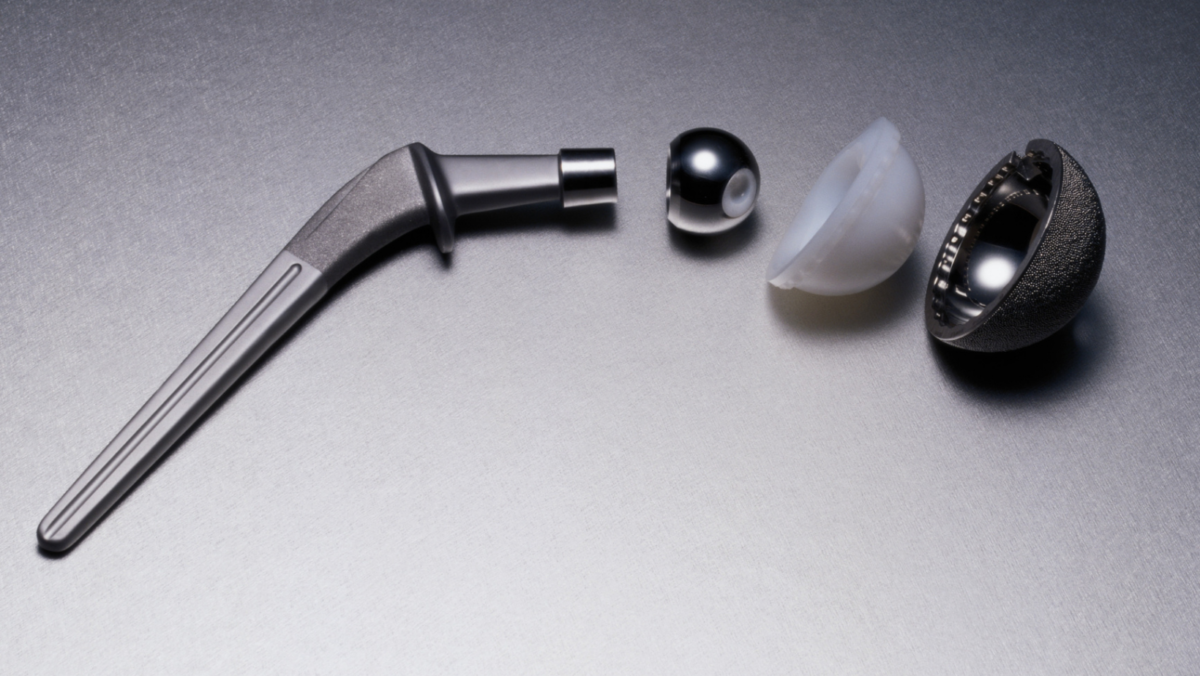 Most people have heard the hip described as a ball and socket joint. The head of the femur (the ball) and the acetabulum (the socket) form the joint (Fig. 1). The acetabulum is shaped by the combination of 3 bones within the pelvis: the ilium, the ischium, and the pubis. A thick layer of cartilage covers both the femoral head and the acetabulum so that the joint can handle the enormous amount of force that transfers across it during movement. Cartilage is the smooth tissue that covers the bones in a joint and allows the bones to move against each other with minimal friction. A ring of cartilage called the labrum also surrounds the joint and contributes to its stability. The hip is also surrounded by some of the strongest ligaments (tissues connecting bones), tendons (tissues connecting muscle to bone), and muscles in the entire body. These structures attach to the pelvis and to the top of the femur allowing hip movement. 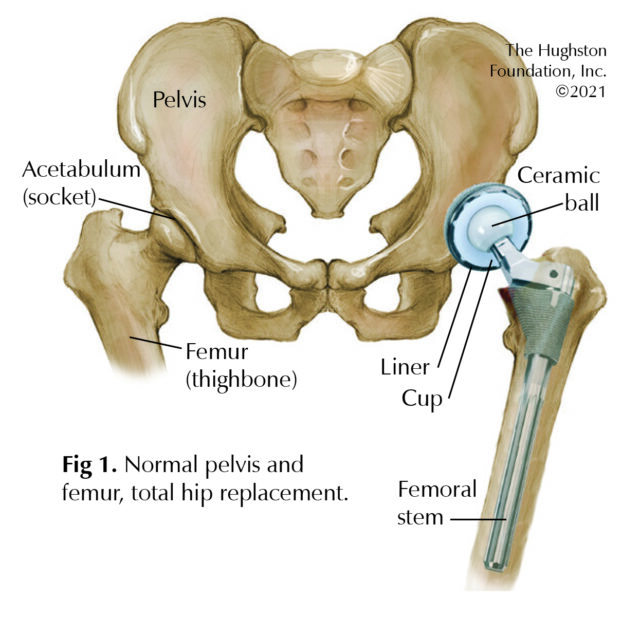 Why have a hip replacement?

The most common reason patients have a hip replacement is osteoarthritis (degenerative joint disease), which causes a breakdown of the joint surface. Osteoarthritis usually causes wear and tear on the joint and leads to destruction of cartilage. As the cartilage wears out, it exposes the bone underneath and causes pain as the 2 bony surfaces move against each other. This is what doctors mean when they say “bone-on-bone” arthritis. There are several other indications for a hip replacement including damage to the femoral head blood supply causing collapse, malformation of either the acetabulum or the femoral head, and fractures of the acetabulum, femoral head, or femoral neck. In the setting of osteoarthritis, physicians often recommend a total hip replacement for patients who have severe pain in their hip that affects how they perform their daily activities or the pain limits their ability to get around.

The best approach for you

Hip replacement can take place in both an inpatient or outpatient setting, and many patients are able to go home the same day as the surgery. The procedure requires access to the hip joint, and a surgeon can do so through many different approaches, or ways through the muscles and surrounding structures. Two of the most common are the posterior (back) and the anterior (front) approaches (Fig. 2). Each approach has its pros and cons; therefore, your surgeon will carefully consider your anatomy, their surgical training, and their own preference when planning the procedure. A discussion with your surgeon prior to surgery is a great opportunity to understand each approach and which he or she feels is best for you. 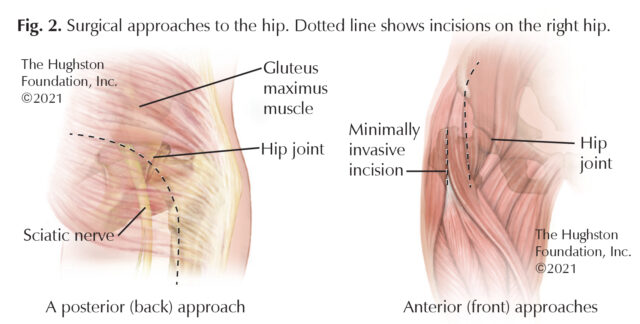 Following access to the hip joint, the surgeon removes the femoral head and labrum and prepares the acetabulum for the implant. Surgeons often use a trial acetabulum implant, which is shaped like a cup to find the appropriate size before placing the formal implant. Although most implants have a surface that encourages bone growth, sometimes surgeons add a screw through the implant or cement to stabilize the cup further. After placing the plastic liner inside the cup, the surgeon’s attention turns to the femur.

Just as in the case of the acetabulum, broaches of increasing size are tested within the femur. These broaches allow for widening of the femoral canal (inside of the bone) until the surgeons finds the appropriate size and fit. After a trial implant is in place with a ball on top and the hip joint is reduced (put back into place), the surgeon can assess the stability of the joint with the goal of having the new prosthetic hip being as close to a natural hip as possible. A femoral implant then replaces the trial, and a ball replaces the femoral head. Like the acetabular component, the femoral implants have a coating that allows the bone to grow naturally onto the implant. Additionally, the surgeon may use cement to help stabilize the femur. The acetabulum and femur implants are usually made of titanium, with the femoral head commonly made of ceramic that sits inside the plastic liner of the acetabular component. The surgeon then repairs the surrounding muscle and skin with suture.

Most patients can walk on the replacement immediately after surgery. Often, your doctor will prescribe physical therapy to further aid in recovery. Additionally, surgeons prescribe patients with a blood thinner, such as aspirin, to prevent blood clots following the surgery and pain medication to help with discomfort. After you return home, you should gradually wean yourself from your prescription medication as your discomfort lessens. You should change your sitting position every 60 minutes throughout the day and you can use ice on your surgery site for 10 to 30 minutes a day after exercising or as needed. Be sure to place a towel between the skin and ice to prevent skin irritation. The plastic surgical dressing is waterproof, so you may shower if you keep the dressing intact, but do not submerge the incision in water until it has completely healed. Notify your surgeon immediately if you have an increase in pain, a fever higher than 101 degrees, increased swelling, or redness at the incision site, or if you notice a change in the color or odor of drainage, as these are all signs of a possible infection.

Patient-satisfaction rates usually exceed 90% or better for those who undergo hip replacement. The procedure is one of the most effective surgeries an orthopedic surgeon can offer his or her patient. The surgeon removes the diseased bones that were painfully moving against one another and replaces them with metal and plastic components. For most patients, their pain level improves within a few months. If you have hip pain that is keeping you from the activities you would like to do, ask your orthopaedist about hip replacement.