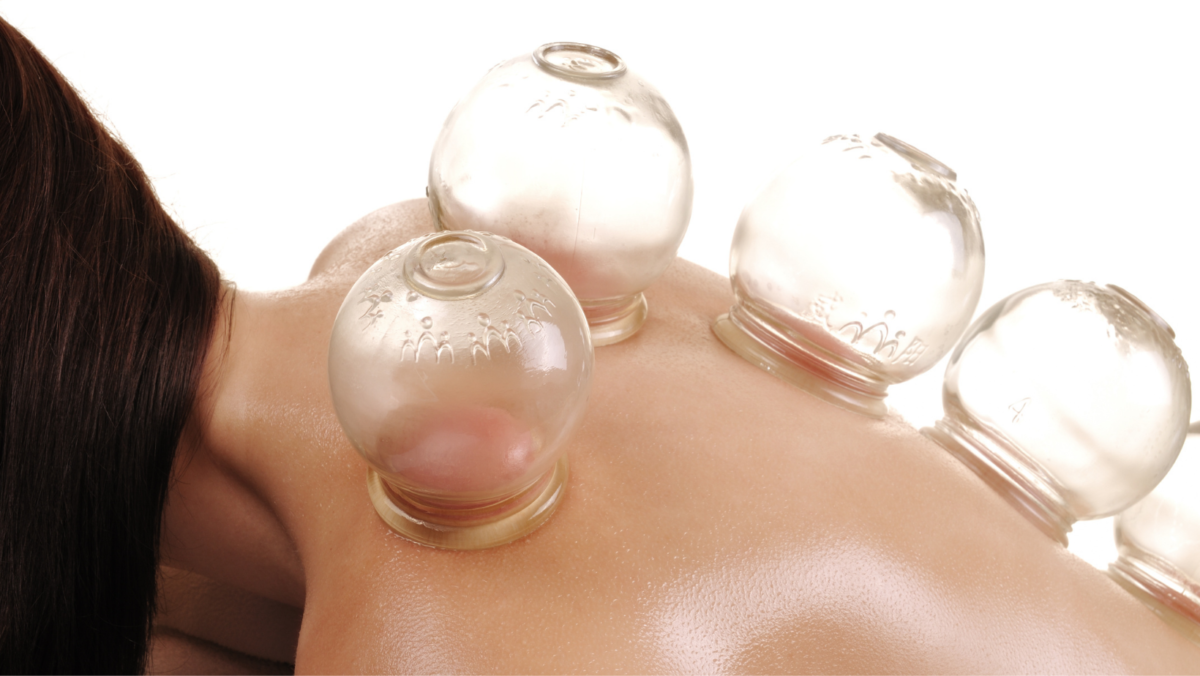 A few years ago, Michael Phelps—appearing with circular blisters covering his back and shoulders—made Olympic history by claiming his 19th gold medal for swimming. With millions of viewers wanting to know the cause of his bruising (Fig. 1), he helped introduce the world to an ancient Eastern therapy known as cupping. 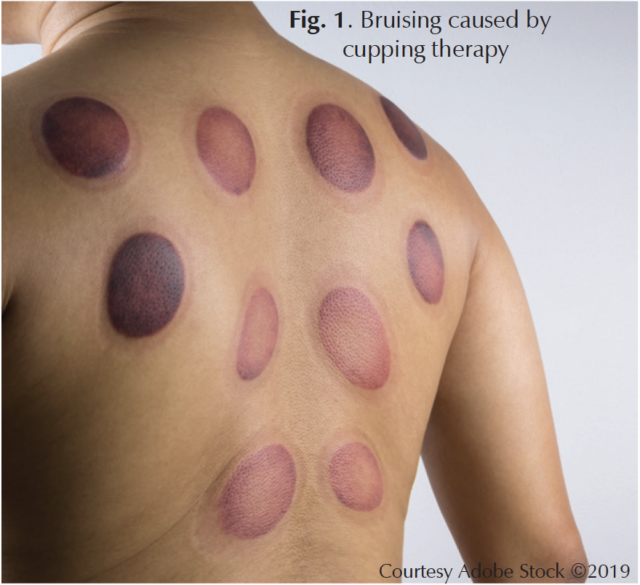 A form of alternative medicine, cupping therapy is a treatment technique that originated in Asian and Middle Eastern cultures centuries ago. Although it is one of the oldest methods of healing used in Eastern cultures, it is still new to Western medicine. This therapy has been used to treat trigger points (muscle knots), gastrointestinal (stomach and intestines) disorders, range of motion, general muscular aches and pains, as well as back, shoulder, and leg pain. One of the telltale signs of the modality is the bruising it can leave behind.

How is it performed?

The application of cupping consists of placing the desired number of cups over soft tissue areas creating a suctionlike seal. The first cups used for cupping were made from bull horn; today however, materials such as glass, bamboo, or silicone are used, and they come in different shapes and sizes. The way the suction is applied through the cups depends on the type of cups used. For example, a widelyused type is the vacuum cup that uses a hand-held pump to suck the air out of the cup. Another popular type, the silicone cup, acts as a plunger on the skin to create the pressure. Additionally, fire cupping uses a glass cup and it is administered by placing a match inside the cup and then placing the cup on the skin (Fig. 2). The heat from the match creates a vacuum seal on the skin. The fire cupping method is more common in Eastern medicine. Typically, practitioners, physical therapists, or physicians place the cups during treatment; however since the kits are available online, some athletes place the cups on themselves or on each other. 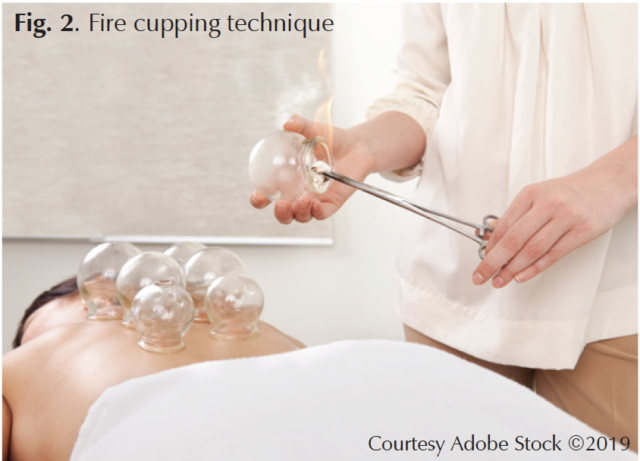 How does it work?

The suction causes a negative pressure and raises the skin inside the cup. The suction lasts only for a few minutes, but long enough to cause the capillaries beneath the surface to rupture. The pressure is thought to stimulate the lymphatic (part of the immune system) and cardiovascular (blood circulation) systems, which in turn increases blood circulation and vasodilation (the dilatation of blood vessels, that decreases blood pressure). Practitioners use the therapy to help relieve muscle tension and tightness in a particular area of the body, improve overall blood flow, and to promote cell repair. They also use it to promote the healing of soft tissue and help to eliminate pain.

Why does the treatment bruise the patient?

Cupping is often associated with the skin marks that are left behind after treatment and are part of the ancient theory of why the therapy works. At the treatment area, a visible spot of redness will appear on the skin and on some individual’s darker spots that resemble bruises develop. These marks are often referred to as cupping blisters. The blisters are sometimes tender at first, but are not painful or harmful to the patient. The theory is that when injuries occur deep within the body’s muscles or soft tissues, bleeding can occur causing a deep bruise and swelling. This bruising and swelling creates a stagnation of blood at the injury site that results in pain, limited range of motion, and if left untreated, more chronic conditions can develop. The seal from the suction of the cup draws the stagnant non-circulating blood toward the surface area of the skin away from the injury site so circulating blood can flow more easily to the injury. The stagnant blood that was trapped in the layers of the skin is what cause the cupping blisters. The darkness and length of time the blisters are visible is dependent on the amount of pressure applied from the cups and the length of time the cups are used. The blisters typically disappear on their own after a few days or they can last as long as a few weeks.

There are 2 different categories—wet and dry cupping. Wet cupping is also known as bleeding cupping, which is invasive; therefore, a physician usually performs the therapy. For this method, the physician cups the injured area first, then removes the cup and pricks or makes a small incision to the reddened area, after that he or she reapplies the cup. The pressure draws the stagnant blood to the skin surface and through the incision site. Dry cupping is administered by placing the cup on the designated area, then applying suction. Some practitioners will apply lotion or oils to the skin before applying the cup to reduce skin irritation. This method can also include moving the cup in a single direction while it is applied or adding a pressure point tool inside the cup before applying suction.

You can experience several adverse side effects depending on the type of therapy used, where you place the cups, and how long they stay in place. For example, using heat to draw the air out of a cup can cause burns to the skin. You can also develop long-term bruising or skin infections from wet therapy. Furthermore, applying the cups to the head or skull have been known to cause more serious reactions. Additionally, with a lack of standardization and the ability to purchase a kit online, a patient may overuse or misuse the cups.

Some researchers believe that cupping relieves pain because it has a placebo effect rather than a physiological outcome. Researchers often link a placebo to the mind and body relationship, which means that if a person believes or expects a particular treatment will do something, then the body’s own chemistry will cause it to occur. Additionally, although cupping has been used for centuries, there is insufficient standardized research to support conclusions concerning its effective use. Cupping may in fact help reduce pain, but there is not enough good evidence to support why. Before buying cups yourself or seeing a practitioner, talk to your doctor about your symptoms and discuss whether cupping is the right therapy for you and your condition.