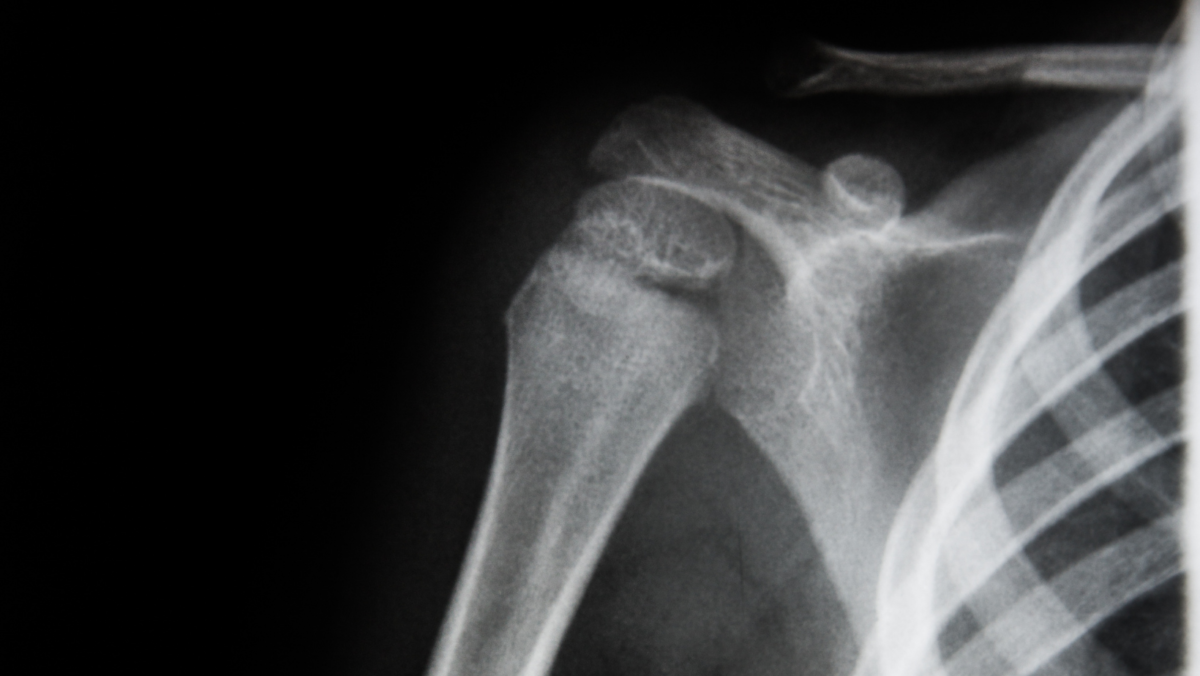 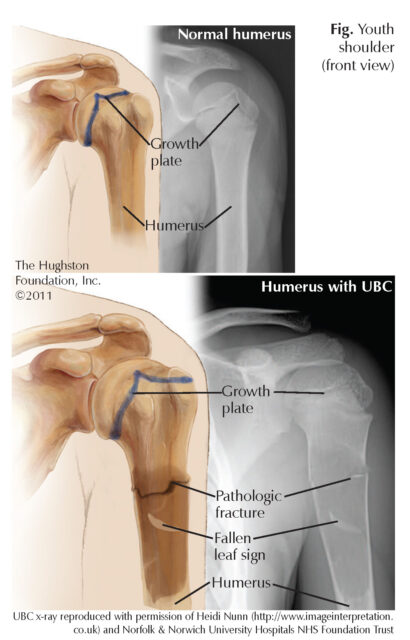 Unicameral bone cysts (UBCs) are noncancerous, fluid-filled cavities that are often discovered at the upper ends of the humerus (upper arm bone) near the shoulder and the femur (thigh bone) near the hip. UBCs are usually found in children around the ages of 9 or 10 years, but the cysts can be found in children from 5 to 15 years of age, and they occur more often in boys. The cysts are typically painless and are often found when a bone or joint is x-rayed for other reasons or when the bone surrounding the cavity fractures. A pathologic fracture is a type of fracture that occurs with a preexisting condition, such as a bone cyst, and often results in an unusual fracture pattern. A pathologic fracture involving a cyst can occur from minor trauma, such as throwing a baseball, wrestling, or being tackled in football because the bone tends to be thinner around the hollow cavity.

Very little is known about the development or cause of UBCs. However, there are effective treatments available if the cyst fractures or if there is a danger of the cyst fracturing too close to the growth plate.

X-rays of a UBC often reveal a hollow cavity centrally located within the bone. The cysts are radiolucent, which means they do not absorb radiation and thus appear dark on x-ray. The x-ray finding called, “fallen leaf sign” can sometimes be seen. A piece of the cyst wall can fracture and become suspended in the fluid of the cyst giving the appearance of a leaf falling from a tree (Figure).

When the cyst is next to the bone’s growth plate (soft area at the end of immature bone where growth occurs), the cyst is called active. Active cysts occur in younger patients and tend to continue to enlarge during skeletal growth. If the cyst enlarges and damages the growth plate it can lead to shortening of the bone. A cyst is called latent when normal bone lies between the cyst and the growth plate. Latent cysts occur in older individuals and do not tend to expand.

Often, UBCs resolve without intervention and can be treated with observation alone. However, when the cyst causes a pathologic fracture, weakens the wall of the bone, or when it occurs in an area of high stress, such as the upper end of the weight-bearing thigh bone, surgery is often considered.

Preventing a fracture is the goal of an effective treatment plan. To encourage bone growth that fills in the cavity, making the bone stronger and less likely to fracture, there are several surgical options available:

• percutaneous aspiration (puncturing the cyst with a needle and withdrawing the fluid) and injection of corticosteroid or bone marrow;

• curettage and bone grafting (scraping the inside of the cyst and filling the void with bone or a bone substitute); or

• resection of the cyst (removing the cyst with or without bone grafting).

UBCs with pathologic fractures or cysts with a high likelihood of fracture can be treated with hardware fixation, such as pins, screws, or flexible nails, often in combination with another procedure.

Most cysts heal with treatment, and if left alone, most will heal by the time the skeleton stops growing. The treatment should be individualized based on the child’s age, overall health, medical history, and normal activities. Only after a thorough discussion of the risks, benefits, and various surgical and nonsurgical options can a decision be made. A decision can be difficult and the risks of surgery must be weighed with the likelihood of a fracture occurring.